At the root of all our thoughts, emotions and behaviors is the communication between neurons within our brains. Brainwaves are produced by synchronized electrical pulses from masses of neurons communicating with each other.

Brainwaves are detected using sensors placed on the scalp. They are divided into bandwidths to describe their functions (below), but are best thought of as a continuous spectrum of consciousness; from slow, loud and functional – to fast, subtle, and complex.

It is a handy analogy to think of Brainwaves as musical notes – the low frequency waves are like a deeply penetrating drum beat, while the higher frequency brainwaves are more like a subtle high pitched flute. Like a symphony, the higher and lower frequencies link and cohere with each other through harmonics.

The descriptions that follow are only broadly descriptions – in practice things are far more complex, and brainwaves reflect different aspects when they occur in different locations in the brain.

Brainwave speed is measured in Hertz (cycles per second) and they are divided into bands delineating slow, moderate, and fast waves. 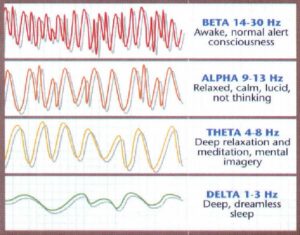 Infra-Low brainwaves (also known as Slow Cortical Potentials), are thought to be the basic cortical rhythms that underlie our higher brain functions. Very little is known about infra-low brainwaves. Their slow nature make them difficult to detect and accurately measure, so few studies have been done. They appear to take a major role in brain timing and network function.

Delta brainwaves are slow, loud brainwaves (low frequency and deeply penetrating, like a drum beat). They are generated in deepest meditation and dreamless sleep. Delta waves suspend external awareness and are the source of empathy. Healing and regeneration are stimulated in this state, and that is why deep restorative sleep is so essential to the healing process.

Theta brainwaves occur most often in sleep but are also dominant in deep meditation. It acts as our gateway to learning and memory. In theta, our senses are withdrawn from the external world and focused on signals originating from within. It is that twilight state which we normally only experience fleetingly as we wake or drift off to sleep. In theta we are in a dream; vivid imagery, intuition and information beyond our normal conscious awareness. It’s where we hold our ‘stuff’, our fears, troubled history, and nightmares.

Alpha brainwaves are dominant during quietly flowing thoughts, and in some meditative states. Alpha is ‘the power of now’, being here, in the present. Alpha is the resting state for the brain. Alpha waves aid overall mental coordination, calmness, alertness, mind/body integration and learning.

Beta brainwaves dominate our normal waking state of consciousness when attention is directed towards cognitive tasks and the outside world. Beta is a ‘fast’ activity, present when we are alert, attentive, engaged in problem solving, judgment, decision making, and engaged in focused mental activity.

Beta brainwaves are further divided into three bands; Lo-Beta (Beta1, 12-15Hz) can be thought of as a ‘fast idle, or musing. Beta (Beta2, 15-22Hz) is high engagement or actively figuring something out. Hi-Beta (Beta3, 22-38Hz) is highly complex thought, integrating new experiences, high anxiety, or excitement. Continual high frequency processing is not a very efficient way to run the brain, as it takes a tremendous amount of energy.

Gamma brainwaves are the fastest of brain waves (high frequency, like a flute), and relate to simultaneous processing of information from different brain areas. It passes information rapidly, and as the most subtle of the brainwave frequencies, the mind has to be quiet to access it. Gamma was dismissed as ‘spare brain noise’ until researchers discovered it was highly active when in states of universal love, altruism, and the ‘higher virtues’. Gamma is also above the frequency of neuronal firing, so how it is generated remains a mystery. It is speculated that Gamma rhythms modulate perception and consciousness, and that a greater presence of Gamma relates to expanded consciousness and spiritual emergence.

What brainwaves mean to you

Our brainwave profile and our daily experience of the world are inseparable.  When our brainwaves are out of balance, there will be corresponding problems in our emotional or neuro-physical health. Research has identified brainwave patterns associated with all sorts of emotional and neurological conditions. more…

Chemical interventions such as medications or recreational drugs are the most common methods to alter brain function; however brainwave training is our method of choice.

Over the long term, traditional eastern methods (such as meditation and yoga) train your brainwaves into balance. Of the newer methods, brainwave entrainment is an easy, low-cost method to temporarily alter your brainwave state. If you are trying to solve a particular difficulty or fine-tune your brainwave function, state-of-the-art brain training methods like neurofeedback deliver targeted, quick, and lasting results.